In a typical release cycle, the betaBeta A pre-release of software that is given out to a large group of users to trial under real conditions. Beta versions have gone through alpha testing in-house and are generally fairly close in look, feel and function to the final product; however, design changes often occur as part of the process. stages are known as the period where we ramp down and shift focus to testing and fixing bugs only. The testing stages in the 4.2 release cycle will not differ on this point. However, unlike in some previous releases, the shift to working on bugs and testing will be more pronounced in 4.2.

According to the release schedule, Beta 1 is set to begin on March 11th — just about 2 1/2 weeks from now. This means that on March 10th, any enhancementenhancement Enhancements are simple improvements to WordPress, such as the addition of a hook, a new feature, or an improvement to an existing feature. ticketticket Created for both bug reports and feature development on the bug tracker. that has one or more commits against it, and/or is owned by a coreCore Core is the set of software required to run WordPress. The Core Development Team builds WordPress. committercommitter A developer with commit access. WordPress has five lead developers and four permanent core developers with commit access. Additionally, the project usually has a few guest or component committers - a developer receiving commit access, generally for a single release cycle (sometimes renewed) and/or for a specific component. will be converted to a blessed task.

Without exception, all enhancement tickets not converted to tasks on March 10th will be punted to a future release or closed.

So, if you’ve got a pet ticket you’d still like work on for 4.2, now is the time to start if you haven’t already.

If you’re looking for an enhancement to work on, there’s a whole report to choose from!

If you have a patchpatch A special text file that describes changes to code, by identifying the files and lines which are added, removed, and altered. It may also be referred to as a diff. A patch can be applied to a codebase for testing. that needs developer feedback, add the dev-feedback keyword to the ticket and leave a comment. I would also encourage you to mention the ticket in the comments of the Monday jump-start or Wednesday dev chat agenda posts on make/core. You could also mention the ticket number during the “Open Floor” time at the end of the weekly core dev chat on Wednesdays.

If your ticket has anything to do with administration or UI, jump into the #accessibility, #core-flow, or #design channels on SlackSlack Slack is a Collaborative Group Chat Platform https://slack.com/. The WordPress community has its own Slack Channel at https://make.wordpress.org/chat/. to get accessibility, mobile, or design feedback.

If you feel like you just aren’t going to have time to work on your enhancement ticket between now and the March 10th deadline, no problem. Just leave a comment to that effect on the ticket and somebody will come along and mark it for Future Release.

This seems confusing, because it looks like they are icons to insert something (Image, Gallery, Link, Video, etc), but instead of launching a popup to insert a link or an image, the screen changes and the navigation that was just used to choose disappears completely. (Note: If Standard had some indication of being the default/current selection it wouldn’t be as confusing)

Clicking on one — say Link — makes the UI change, the big icon row go away, and a format switcher link drops below the title rather than keeping its visual hierarchy above the post stuff, and it’s generally disorienting.

If the user thinks, “Whoa, what happened, I better change format again,” and they click on the “Change format’ link under the title field and next to the “Enter URLURL A specific web address of a website or web page on the Internet, such as a website’s URL www.wordpress.org” instruction, the screens morphs again to this:

Where the icon strip is back, but the link field has disappeared and the icon next to Add New Post is still a link. This is super confusing. Does it still think it is a link bc they didn’t actively choose to return to standard, they just chose to see the options? If that’s so, why did the url field disappear?

Looking at the release schedule: 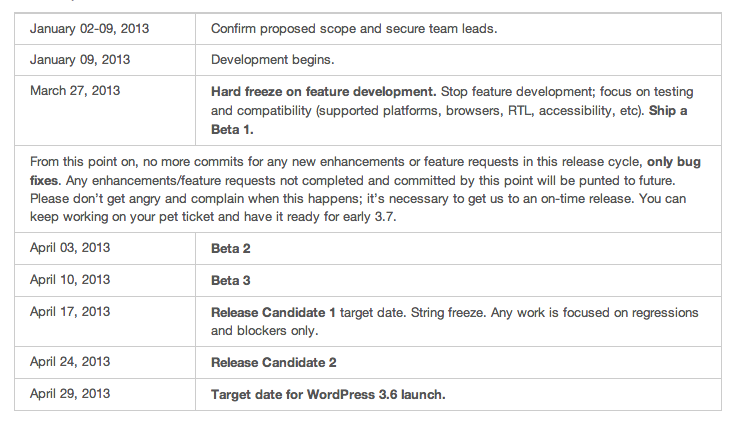 We launched BetaBeta A pre-release of software that is given out to a large group of users to trial under real conditions. Beta versions have gone through alpha testing in-house and are generally fairly close in look, feel and function to the final product; however, design changes often occur as part of the process. 1 on April 4, and it’s been almost 3 weeks without a follow-up beta 2.
…I am wondering if the post formats ui is really prime time ready, or if it should be one of the very first thing sto land in a 3.7 branchbranch A directory in Subversion. WordPress uses branches to store the latest development code for each major release (3.9, 4.0, etc.). Branches are then updated with code for any minor releases of that branch. Sometimes, a major version of WordPress and its minor versions are collectively referred to as a "branch", such as "the 4.0 branch". so we can get the things that are completely ready into the hands of users sooner rather than later?

Since I’m outside the coreCore Core is the set of software required to run WordPress. The Core Development Team builds WordPress. dev group now, I’ve been on both sides of the deadline delay dance. I know how hard it is to let go of something that feels like it is thisclose to done. And I know that just about everyone on the core team will be thinking right about now that I should shut up (and I’m okay with that, because it used to be my first response to deadline questions to core, too). But we have this philosophy posted on wordpress.orgWordPress.org The community site where WordPress code is created and shared by the users. This is where you can download the source code for WordPress core, plugins and themes as well as the central location for community conversations and organization. https://wordpress.org/:

Deadlines Are Not Arbitrary

Deadlines are not arbitrary, they’re a promise we make to ourselves and our users that helps us rein in the endless possibilities of things that could be a part of every release. We aspire to release three major versions a year because through trial and error we’ve found that to be a good balance between getting cool stuff in each release and not so much that we end up breaking more than we add.

Good deadlines almost always make you trim something from a release. This is not a bad thing, it’s what they’re supposed to do.

The route of delaying a release for that one-more-feature is, literally, a rabbit hole. We did that for over a year once, and it wasn’t pleasant for anybody.

The more frequent and regular releases are, the less important it is for any particular feature to be in this release. If it doesn’t make it for this one, it’ll just be a few months before the next one. When releases become unpredictable or few and far between, there’s more pressure to try and squeeze in that one more thing because it’s going to be so long before the next one. Delay begets delay.

I’m not trying to be a troublemaker or imply that anyone isn’t doing everything they can — I know for a fact that people are working themselves into the ground on this release. Nor am looking to incite a debate about deadlines or all the explanations of how we fell behind this time (I’ve been following along, everything is really pretty normal). But would it be better to not try to squeeze it all in, get out what we can ship now (including the awesome 2013 theme that regular people still don’t have access to), and take a quick breath to relax before diving back in on a new cycle? Shipping is a feature, too. 😉

1786 people have pledged time to contribute to Core Team efforts! When looking for help on a project or program, try starting by reaching out to them!