This thread discusses featured imageFeatured image A featured image is the main image used on your blog archive page and is pulled when the post or page is shared on social media. The image can be used to display in widget areas on your site or in a summary list of posts. flowFlow Flow is the path of screens and interactions taken to accomplish a task. It’s an experience vector. Flow is also a feeling. It’s being unselfconscious and in the zone. Flow is what happens when difficulties are removed and you are freed to pursue an activity without forming intentions. You just do it.

Flow is the actual user experience, in many ways. If you like, you can think of flow as a really comprehensive set of user stories. When you think about user flow, you’re thinking about exactly how a user will perform the tasks allowed by your product.Flow and Context

through the media modal. There are some requests that the filterFilter Filters are one of the two types of Hooks https://codex.wordpress.org/Plugin_API/Hooks. They provide a way for functions to modify data of other functions. They are the counterpart to Actions. Unlike Actions, filters are meant to work in an isolated manner, and should never have side effects such as affecting global variables and output. in the media modal remember the “uploaded to this post” filter setting independently for the featured image flow. Here’s an attempt at capturing this flow. 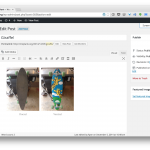 This is an old post. I’ve uploaded lots of images since this was published. A featured image is not set. Why do I want to set one now? A common scenario is that you have switched to a theme that requires featured images. Click Set featured image. 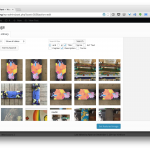 By default, all media is shown. I usually want to set the featured image to an image already on the post. To find the images for this post in the all media view, I’d have to scroll pretty far back, scanning small thumbnails as I go. Luckily, there’s an uploaded to this post filter. Click Images. 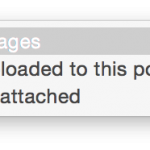 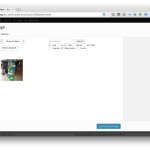 There are the images I want.

“Uploaded to this post” requires that the image be attached to a post. Images uploaded through the media modal from the editor are attached to the post, but images uploaded directly to the media library are not attached and don’t get attached later when added to a post. We could use APIAPI An API or Application Programming Interface is a software intermediary that allows programs to interact with each other and share data in limited, clearly defined ways. for pulling images out of post content, like we do with some other media types.

603 people have pledged time to contribute to Test Team efforts! When looking for help on a project or program, try starting by reaching out to them!