Welcome to the official blog of the translator team for the WordPress open sourceOpen Source Open Source denotes software for which the original source code is made freely available and may be redistributed and modified. Open Source **must be** delivered via a licensing model, see GPL. project. This is where we discuss all things related to translating WordPress. Follow our progress for general updates, status reports, and debates.

We’d love for you to help out!

You can help translate WordPress to your language by logging in to the translation platform with your WordPress.orgWordPress.org The community site where WordPress code is created and shared by the users. This is where you can download the source code for WordPress core, plugins and themes as well as the central location for community conversations and organization. https://wordpress.org/ account and suggesting translations (more details).

Want to help in managing and validating translations? Get in touch with the existing language team and follow the glossaries & style guides if the team has them.

Don’t see your language? You can request support for it.

We have meetings every week on SlackSlack Slack is a Collaborative Group Chat Platform https://slack.com/. The WordPress community has its own Slack Channel at https://make.wordpress.org/chat/. in polyglots (the schedule is on the sidebarSidebar A sidebar in WordPress is referred to a widget-ready area used by WordPress themes to display information that is not a part of the main content. It is not always a vertical column on the side. It can be a horizontal rectangle below or above the content area, footer, header, or any where in the theme. of this page). You are also welcome to ask questions on the same channel at any time!

See who approved/rejected your translation

It took a while but you can now finally see which user approved (or rejected) a translation. You’ll find the information in the metaMeta Meta is a term that refers to the inside workings of a group. For us, this is the team that works on internal WordPress sites like WordCamp Central and Make WordPress. sidebarSidebar A sidebar in WordPress is referred to a widget-ready area used by WordPress themes to display information that is not a part of the main content. It is not always a vertical column on the side. It can be a horizontal rectangle below or above the content area, footer, header, or any where in the theme. of a translation: 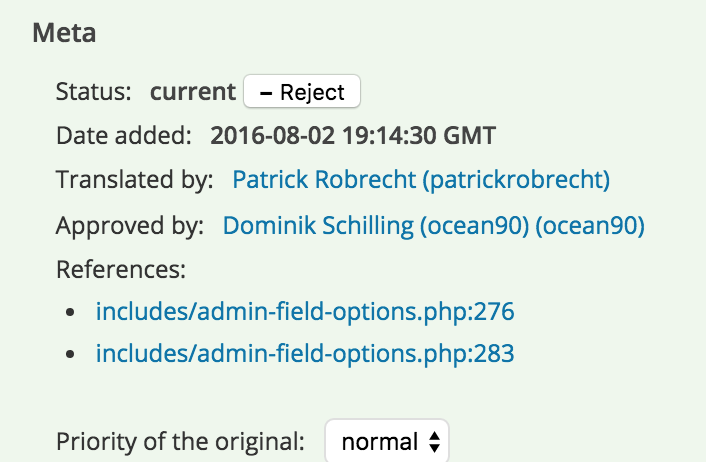 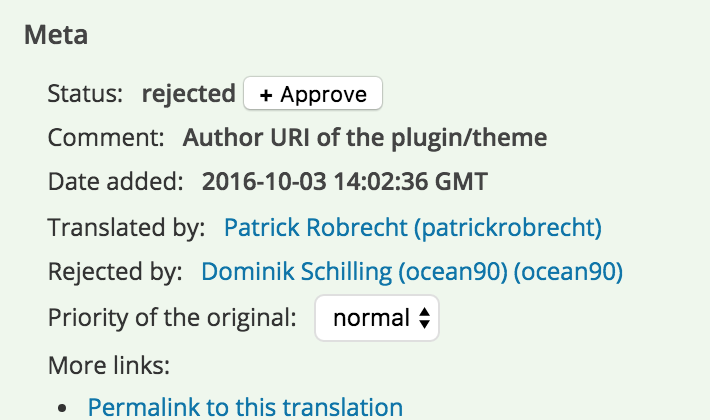 This was originally proposed by @akirk in #1654. This feature landed in GlotPress 2.1 but wasn’t available on translate.wordpress.org until now. Since today everyone can import translations with status waiting.

GTEs/PTEs can choose the status when importing a file. The import UIUI UI is an acronym for User Interface - the layout of the page the user interacts with. Think ‘how are they doing that’ and less about what they are doing. looks like this: 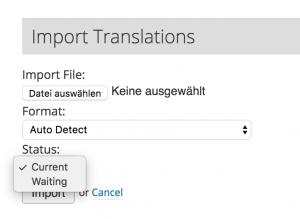 A regular translators can’t choose the status. It’s set to waiting by defaut: 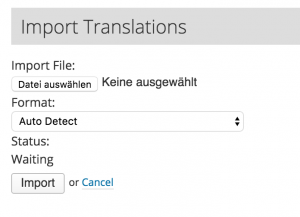 Regular translators can use the import functionality only for theme and pluginPlugin A plugin is a piece of software containing a group of functions that can be added to a WordPress website. They can extend functionality or add new features to your WordPress websites. WordPress plugins are written in the PHP programming language and integrate seamlessly with WordPress. These can be free in the WordPress.org Plugin Directory https://wordpress.org/plugins/ or can be cost-based plugin from a third-party projects.

This is currently in a testing phase so any feedback is highly appreciated.

Let us know in the comments if you have any questions or found a bug in one of the recent changes. 🐛

Use this button to show the main posts only and exclude all requests (e.g. CLPTE/PTE and locale requests).

Enter your email address to receive a monthly newsletter, featuring important updates from the Polyglots team.

Processing…
Success! You're on the list.
Whoops! There was an error and we couldn't process your subscription. Please reload the page and try again.

These are the people who review new locale requests and can help you with questions about translating WordPress.

1164 people have pledged time to contribute to Polyglots Team efforts! When looking for help on a project or program, try starting by reaching out to them!