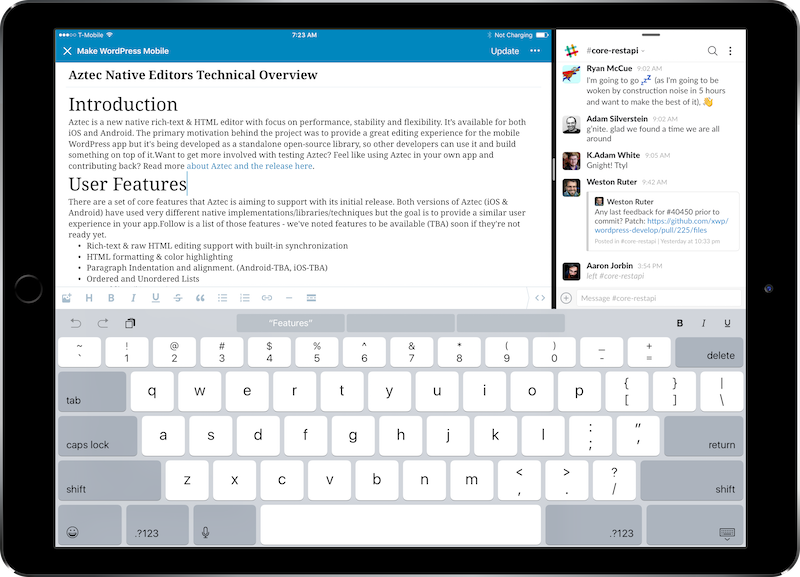 Aztec is a new native rich-text & HTMLHTML HTML is an acronym for Hyper Text Markup Language. It is a markup language that is used in the development of web pages and websites. editor with focus on performance, stability and flexibility. It’s available for both iOSiOS The operating system used on iPhones and iPads. and Android. The primary motivation behind the project was to provide a great editing experience for the mobile WordPress app but it’s being developed as a standalone open-source library, so other developers can use it and build something on top of it.

This post gets more into the technical features and implementations of each of the two flavors of Aztec. The architectures are both complex and this overview should help start the process of understanding how all the pieces work together.

Want to get more involved with testing Aztec? Feel like using Aztec in your own app and contributing back? Read more about Aztec and the release here.

There are a set of coreCore Core is the set of software required to run WordPress. The Core Development Team builds WordPress. features that Aztec is aiming to support with its initial release. Both versions of Aztec (iOS & Android) have used very different native implementations/libraries/techniques but the goal is to provide a similar user experience in your app.

Follow is a list of those features – we’ve noted features to be available (TBA) soon if they’re not ready yet.

Aztec iOS was developed to try to keep the dependencies count as low as possible. There are currently only two dependencies:

Synchronization of NSAttributedString and our DOM representation

One of the main goals behind Aztec was to provide a visual HTML editor that would maintain its HTML source intact as much as possible.

The reason is that HTML tends to be very sensible to changes when combined with custom CSSCSS CSS is an acronym for cascading style sheets. This is what controls the design or look and feel of a site. or even with javascriptJavaScript JavaScript or JS is an object-oriented computer programming language commonly used to create interactive effects within web browsers. WordPress makes extensive use of JS for a better user experience. While PHP is executed on the server, JS executes within a user’s browser. https://www.javascript.com/..  We recognized that it would be important to not lose any information between the initial input, and the final output after visually-editing it.

We wanted a file with a few localized edits to look almost the same as the original file.

Our experimental approach was to basically maintain an NSAttributedString as a sort quick visual cache to show on screen, and to map the edit operations to a parallel DOM structure.

Needless to say, this is a very difficult approach to maintain because there’s a big risk of de-synchronization between the cache and the DOM structure.

We’ve done a lot of work to ensure this is not a problem, and to some degree we’ve been successful, but we’re still suffering a bit from maintainability issues due to the complexity of the approach.

There are some upcoming changes that are aimed specifically at making the code easier to maintain and test.

HTML has a lot of implicit newlines we need to deal with.  They exist at the end of blockBlock Block is the abstract term used to describe units of markup that, composed together, form the content or layout of a webpage using the WordPress editor. The idea combines concepts of what in the past may have achieved with shortcodes, custom HTML, and embed discovery into a single consistent API and user experience.-level elements (block level means they’re elements that exist in their own line).

We call them “visual newlines” because they are only shown to the user in visual mode.

When editing regular content, you can simply edit all of the text nodes involved.  The problem with visual newlines is that editing them means more complicated actions need to take place.

Think about removing the trailing visual newline in a list.  It basically means extending the list to include what’s after it, up to the next paragraph break, and modifying the DOM structure to merge those elements.

We’ve done a lot of progress with handling these visual newlines.  Quite a good amount of effort has been put into making them work, but we think more effort will be needed for specific case we may not have fully considered.

What We’re Really Proud Of

We’re really proud of the work we’ve done to create a generic HTML editing component, that doesn’t feel slow or clunky.  There’s simply no comparison with how it feels when compared to other mobile editors.

The amount of time we’ve put into the architecture has paid off as well.  We still need to improve some sections of the code to make them cleaner and easier to maintain, but for the most part we feel pretty good about the quality of Aztec iOS, and most of the code is properly documented to make it easier to navigate.

The architecture was designed to be easy to write automated tests for.  We’ve been encouraging ourselves to try and write at least one unit test triggering each bug report we get, which has proved to be a key factor in avoiding regressions.

All of Aztec’s features & capabilities are used and demonstrated in a sample Demo App, which is part of the repository.

One of the biggest challenges for us was avoiding regression errors by implementing new features & bug fixes. For example, things like list or quote editing involves a fair amount of character-level processing. It is key that the element and newline spans are applied to specific locations around certain characters. This system is sensitive to changes, so a small bug fix in one part of the editor often triggered a cascade and broke things in other parts. To help us overcome this we had to write numerous unit tests for every feature and edge case we could think of. It gave us confidence to see the tests passing after changing something and it would have been nearly impossible to progress without them.

We’ve come a long way since starting on the project in June of 2016.

Aztec has been integrated in the WordPress betaBeta A pre-release of software that is given out to a large group of users to trial under real conditions. Beta versions have gone through alpha testing in-house and are generally fairly close in look, feel and function to the final product; however, design changes often occur as part of the process. release and with every additional feature & bug fix it is becoming more usable in real world applications. We’ve designed the library to be simple to integrate and we’re continuing to work on the plug-in architecture so that it will be even more extensibleExtensible This is the ability to add additional functionality to the code. Plugins extend the WordPress core software. and customizable in the future.

Help us test the Aztec native editors by using them in your own project and contributing back. Check out the original announcement post under “How should I report?” for more information on how to get involved.

588 people have pledged time to contribute to Mobile Team efforts! When looking for help on a project or program, try starting by reaching out to them!