The WordPress Marketing Team markets WordPress and its community to the wider world.

Our work is tracked on the GitHub Marketing Task Board under the WordPress organization. If you are looking for a card you think should be transferred from the old repos, check the previous repositories and then let the team know the link.

If you are planning a Marketing Table at a Contributor Event, please let us know in the Slack channel.

Read more about our team and how to get involved.

Come and be part of the #marketing channel on Slack. You can join our next Weekly Marketing Chat at Wednesday 15:00 UTC .
Diary dates 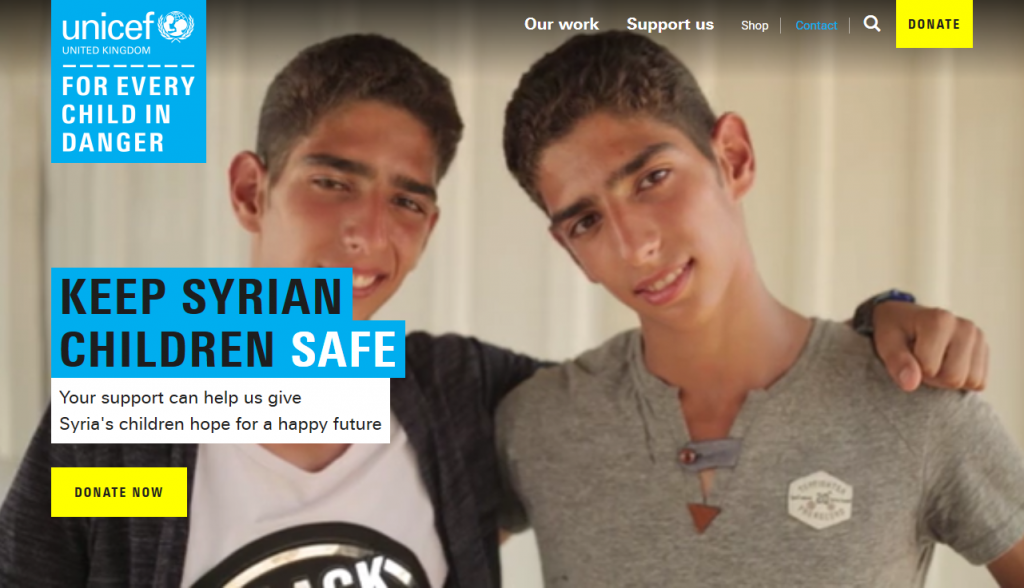 This Case Study is published by the Make WordPress Marketing Team. Provided by Manifesto, a multi-award winning agency of creatives and technologists in London, UK.

Market research had revealed that Unicef UK, while well known for its work on the ground in the countries where it delivers aid, needed to improve their brand awareness. Unicef UK embarked upon a bold repositioning initiative to address this lack of brand recognition. Part of this repositioning required a redesign of their website with an focus on improving fundraising. Another important aspect of the project was to increase the impact of campaigns and advocacy by creating emotionally engaging user experiences. The hope was to drive users towards taking action.

Importantly, Unicef UK recognized that its website was no longer a technical fit for their purposes, having last been refreshed over six years ago. The site contained a multitude of out-of-date content spanning over 4,000 pages. The site was not mobile responsive, as they maintained separate mobile and blog websites, causing a confusing user experience. Working together with Unicef, Manifesto began the process to launch their new website.

The Content Management System (CMS) Unicef UK previously used, was clunky and outdated, with an overly-complicated admin process. Many of the content creators were actually “scared” of it, so ensuring the new system was more accessible and intuitive for content creators was the number one priority.

Another challenge was that the current website could not keep pace with the traffic demands placed upon it, having failed on several occasions due to spikes in pageviews caused by the public responding to sudden world emergencies. With these factors in mind, Manifesto began exploring different methods to ensure the new site would withstand these kinds of events in the future, without loss of service or speed.

Because of their legacy platforms, migrationMigration Moving the code, database and media files for a website site from one server to another. Most typically done when changing hosting companies. and development obstacles were mostly technical. Asecure transition with minimal disruption is key for both front-facing PR reasons and, of course, fundraising.

Unicef UK wanted the website integrated with their existing donation platform. It was also important to thoroughly test the new system before launch, since making sure the site held up to spikes in demand was one of the main goals.

Why not use WordPress? The editors at Unicef had experience on the platform and enjoyed its easy-to-use interface. Being the most popular CMS means it is very well supported, documented, and highly customizable, which made WordPress the choice in this endeavor.

The legacy platform integration was solved by creating a lightweight Restful APIAPI An API or Application Programming Interface is a software intermediary that allows programs to interact with each other and share data in limited, clearly defined ways. layer over the existing platform. This was accomplished with the AWS API Gateway and Lambda. WordPress’ extensibility with custom made plugins make the process of integrating the API straightforward and maintainable in the long term.

The new site is easier to use more reliable and now able to handle disaster-related traffic spikes. This freed Unicef to focus on improvements and optimization, while the wider organization could increasingly take ownership of creating, updating, and maintaining day-to-day content.

The new site has had a massive impact internally at Unicef, and the organization is really proud of the final product. It has enthused existing users, as well as encouraged some stakeholders who previously weren’t particularly engaged with their online content, to really understand how impactful the site can be. They also actually want to learn more about how they can make use of the new platform, as part of the supporter experience.

Since launching in November 2016, conversion rates among website visitors have more than doubled. Cash donations are up 55% per visitor, and, in December, Unicef UK received more online donations in a single month than ever before.

In the long-term, Unicef is conservatively estimating a minimum of 50-60% uplift in base-level conversion. Deciding on a new website was a great choice and a step towards protecting more of the world’s children from hunger, disease, and the chaos of war; and in this situation, WordPress was the ideal solution.

1396 people have pledged time to contribute to Marketing Team efforts! When looking for help on a project or program, try starting by reaching out to them!