The Customizer Theme Switcher feature-pluginPlugin A plugin is a piece of software containing a group of functions that can be added to a WordPress website. They can extend functionality or add new features to your WordPress websites. WordPress plugins are written in the PHP programming language and integrate seamlessly with WordPress. These can be free in the WordPress.org Plugin Directory https://wordpress.org/plugins/ or can be cost-based plugin from a third-party brings theme switching into the CustomizerCustomizer Tool built into WordPress core that hooks into most modern themes. You can use it to preview and modify many of your site’s appearance settings.. This project aims to clarify the relationship between themes and theme options by introducing a themes “panel” (it’s actually a custom section since it contains controls, not a multi-level hierarchy of sections and controls) to the Customizer. The themes panel slides in from the left instead of the right, implying a hierarchy of:

Essentially, the phase of the project proposed for WordPress 4.2 (and that exists in the plugin currently) brings the “THX38” theme browsing experience into the Customizer. Installed themes are browse-able directly in the Customizer controls panel, and have a details modal like the adminadmin (and super admin) page. Functionally, theme-switching is accomplished by reloading the Customizer to live-preview a different theme. @westonruter is working on several related improvements that could further streamlining the experience from a technical perspective, but this feature pluginFeature Plugin A plugin that was created with the intention of eventually being proposed for inclusion in WordPress Core. See Features as Plugins. is focusing on the switching UIUI User interface, with other improvements considered “nice to have”. @folletto and I have also started planning a second phase of the project for a future release that would also address installing new themes, and simplifying the distinction between installed and available themes. @designsimply is currently in the process of user-testing the plugin.

We’ll hold a meeting in #core-customize Slack to discuss the progress of the plugin this Tuesday, January 27, 2015 16:00 UTC, and continue at that time weekly as needed at that time. Development is happening directly in the WordPress.orgWordPress.org The community site where WordPress code is created and shared by the users. This is where you can download the source code for WordPress core, plugins and themes as well as the central location for community conversations and organization. https://wordpress.org/ plugins repo – I’ll give commit access to anyone interested in contributing code. Outstanding issues are noted below, but the plugin is generally ready for review of code, inline-docs, design, and accessibilityAccessibility Accessibility (commonly shortened to a11y) refers to the design of products, devices, services, or environments for people with disabilities. The concept of accessible design ensures both “direct access” (i.e. unassisted) and “indirect access” meaning compatibility with a person’s assistive technology (for example, computer screen readers). (https://en.wikipedia.org/wiki/Accessibility) (with each of those being theoretically good-to-go in the plugin). Note that the plugin can’t really work on mobile because the Customizer doesn’t really work on mobile, see #28784 (great 4.2 candidate if it gets a patchpatch A special text file that describes changes to code, by identifying the files and lines which are added, removed, and altered. It may also be referred to as a diff. A patch can be applied to a codebase for testing.).

Known issues (see also a list of coreCore Core is the set of software required to run WordPress. The Core Development Team builds WordPress. merge notes in the plugin’s readme):

Initially we were covering themes.php and install-theme.php. Time and dev resources constraints forced us to focus the last few weeks solely on getting themes.php fully ready. 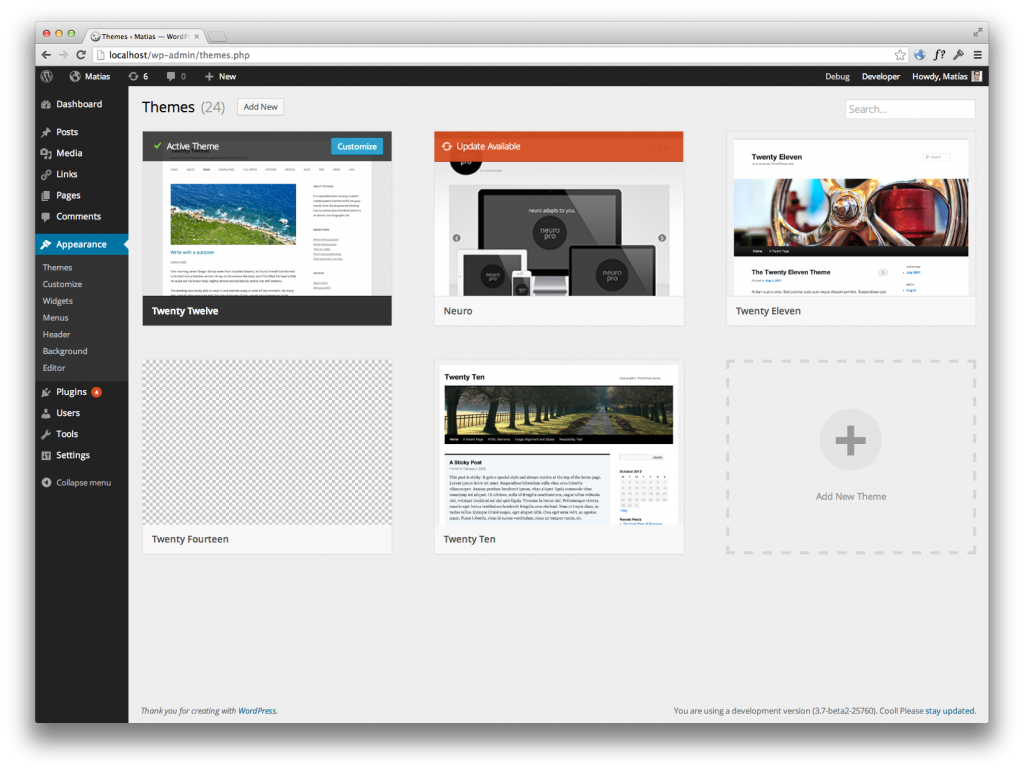 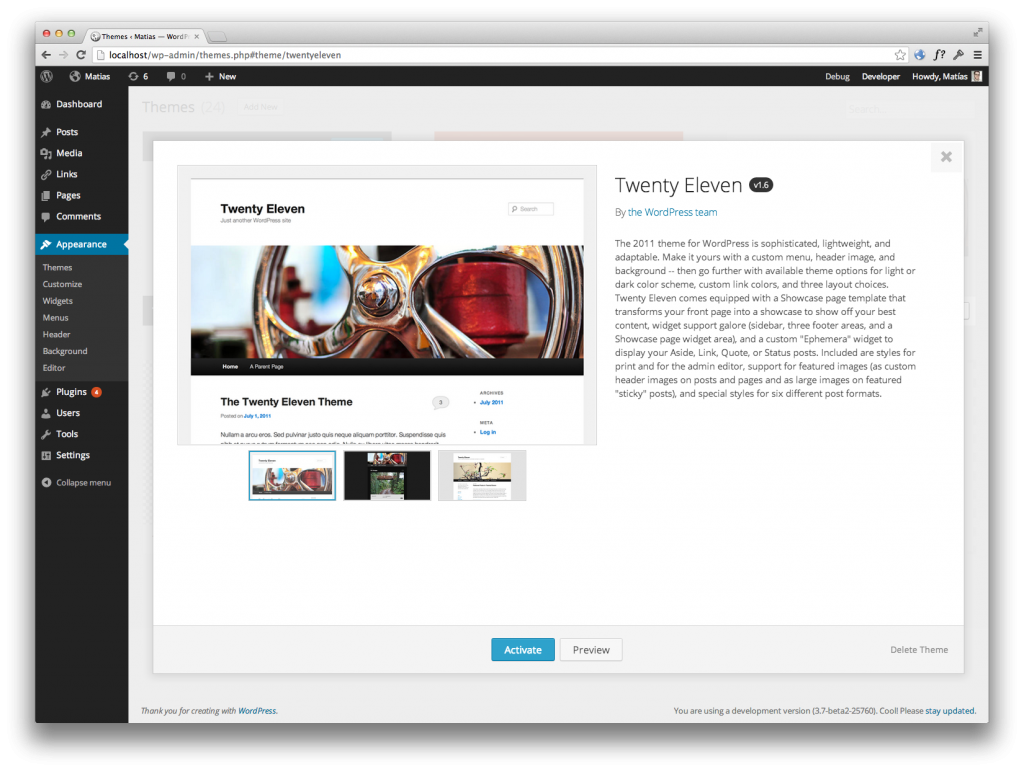 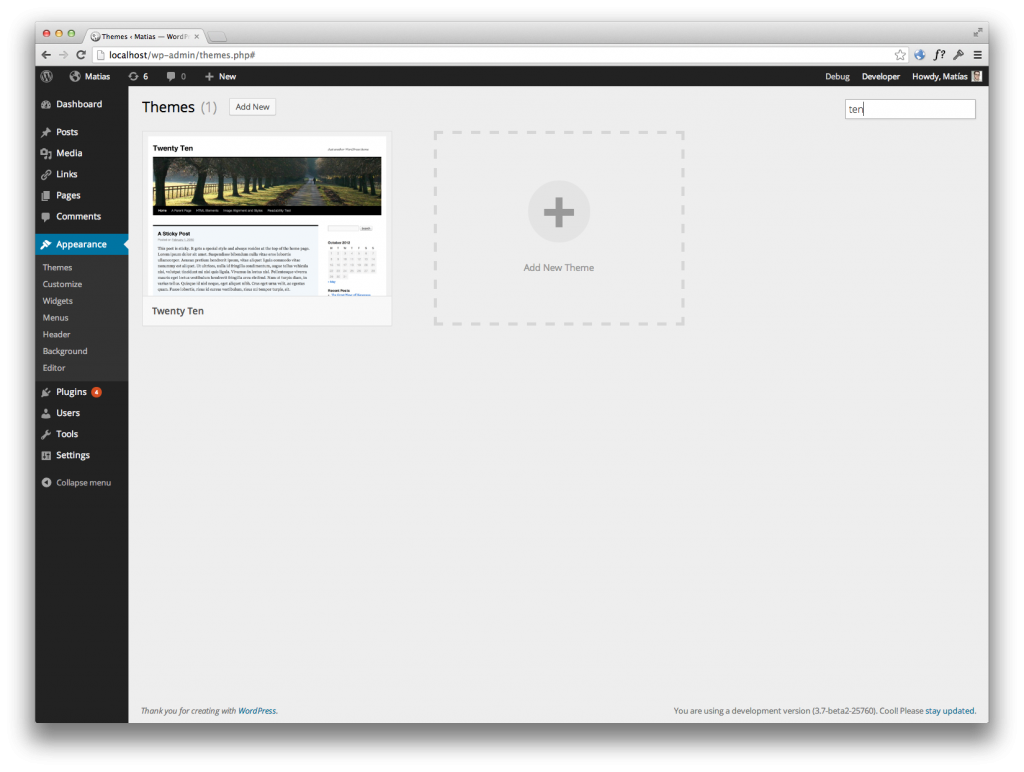 First user test with current adminadmin (and super admin) interface showed the amount of time between arriving at themes.php and understanding what was going on (which themes are installed, how to add new ones, etc) was quite big, going to the install themes screen took them ages. In contrast, tests ran with the THX pluginPlugin A plugin is a piece of software containing a group of functions that can be added to a WordPress website. They can extend functionality or add new features to your WordPress websites. WordPress plugins are written in the PHP programming language and integrate seamlessly with WordPress. These can be free in the WordPress.org Plugin Directory https://wordpress.org/plugins/ or can be cost-based plugin from a third-party showed us the interface was grasped very fast, and people got to the install themes page in a matter of seconds.

The installing themes screen was left as a prototype for the future.

Early user testing clearly showed understanding and interacting with the screen is not easy. One user eloquently said, “I was thinking I would have a screen with a bunch of themes to look at.” For install-themes, filters proved to be hard to use paired with the fact the words users think of to describe themes aren’t present in the theme keywords we offer.

1379 people have pledged time to contribute to Core Team efforts! When looking for help on a project or program, try starting by reaching out to them!