This post is a summary of the latest weekly Media component meeting, which took place in #core-media on SlackSlack Slack is a Collaborative Group Chat Platform https://slack.com/. The WordPress community has its own Slack Channel at https://make.wordpress.org/chat/., on Thursday, June 29 at 18:00 UTC. The purpose of these meetings are to move priority tasks forward, provide feedback on issues of interest, and review media focused tickets on TracTrac An open source project by Edgewall Software that serves as a bug tracker and project management tool for WordPress..

Media + GutenbergGutenberg The Gutenberg project is the new Editor Interface for WordPress. The editor improves the process and experience of creating new content, making writing rich content much simpler. It uses ‘blocks’ to add richness rather than shortcodes, custom HTML etc. https://wordpress.org/gutenberg/

Our agenda this week focussed on getting a better understanding of the current product vision for working with media in Gutenberg in order to coordinate priorities and ensure future improvements to the media component align with the needs of the new editor experience.

The major takeaway from this conversation was that Gutenberg intends to handle the UIUI User interface flows for editing media within post content inside the editor itself rather than relying on the wp.media.frame modal for these actions. The image gallery blockBlock Block is the abstract term used to describe units of markup that, composed together, form the content or layout of a webpage using the WordPress editor. The idea combines concepts of what in the past may have achieved with shortcodes, custom HTML, and embed discovery into a single consistent API and user experience. in Gutenberg is a good example of this change.

The current screen in the media modal for editing gallery settings 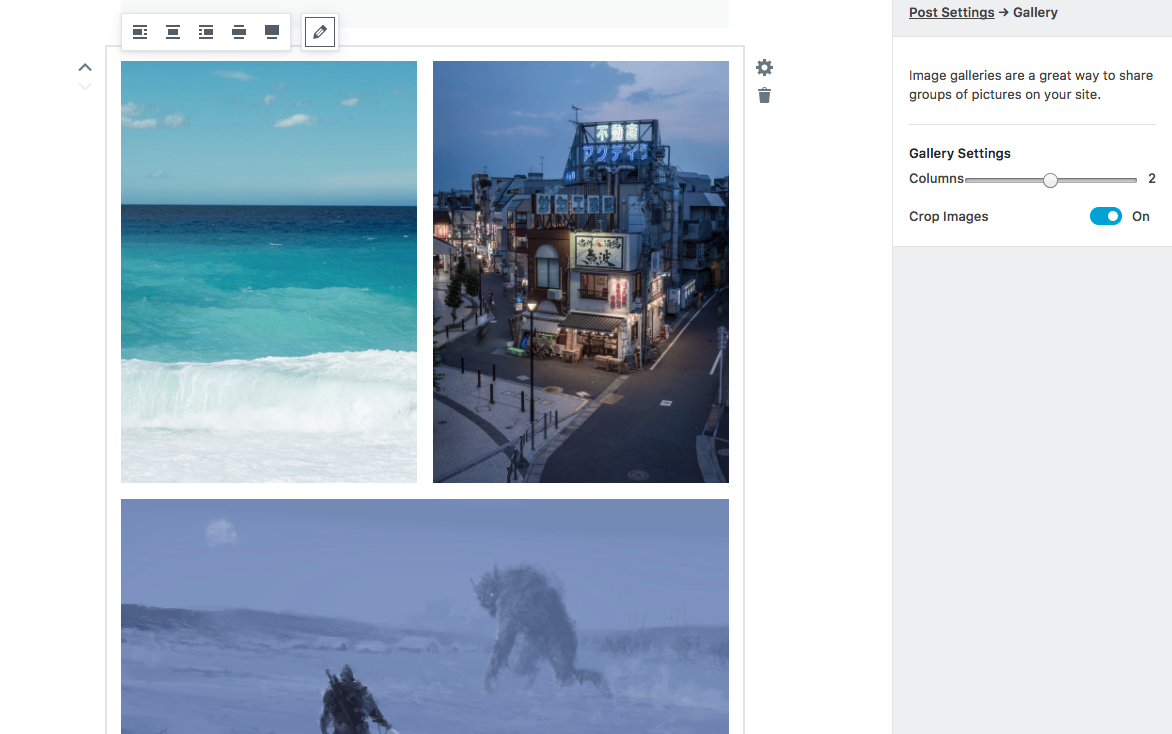 A preview of editing image gallery settings in the Gutenberg sidebarSidebar A sidebar in WordPress is referred to a widget-ready area used by WordPress themes to display information that is not a part of the main content. It is not always a vertical column on the side. It can be a horizontal rectangle below or above the content area, footer, header, or any where in the theme.

By handling post-level setting in the editor, people can immediately preview changes in the editor. This change reduces the burden of the current media modal to act primarily as media library, and as a way to manage media information that applies site-wide. This should also make it more clear when changes will affect a media item site-wide, which is a nice UXUX User experience win.

To prepare for this shift, we need to document the current flows that will need to be adjusted in order to support this separation between managing post-level data and site-wide media library data.

Additionally, the Gutenberg team asked for help creating blocks for additional media elements like video, audio, etc. The Gutenberg GitHubGitHub GitHub is a website that offers online implementation of git repositories that can can easily be shared, copied and modified by other developers. Public repositories are free to host, private repositories require a paid subscription. GitHub introduced the concept of the ‘pull request’ where code changes done in branches by contributors can be reviewed and discussed before being merged be the repository owner. https://github.com/ repo now contains a “media” label for collecting issues that relate to the media component.

Earlier this week, @desrosj ran a separate bugbug A bug is an error or unexpected result. Performance improvements, code optimization, and are considered enhancements, not defects. After feature freeze, only bugs are dealt with, with regressions (adverse changes from the previous version) being the highest priority. scrub focussed on new tickets on the Media component. We plan on running separate scrubs throughout the 4.9 release cycle. If you’re interested in helping with that effort, please contact @desrosj or @joemcgill on Slack.

Over the past several releases, the CustomizerCustomizer Tool built into WordPress core that hooks into most modern themes. You can use it to preview and modify many of your site’s appearance settings. APIAPI An API or Application Programming Interface is a software intermediary that allows programs to interact with each other and share data in limited, clearly defined ways. has drastically improved its built-in media controls, empowering developers to leverage the power of the WordPress media management experience in themes and plugins with ease. WordPress 4.1 refactored the image and upload controls to leverage the media modal for the first time (see #21483). 4.2 abstracted this functionality to a new base media control class. And now in WordPress 4.3, we’ve added a control for cropped images. In this post, I’ll outline the recent changes in Customizer media controls and explain the differences between the available controls.

Before WordPress 4.2, all Customizer media controls saved the file url to their corresponding settings. While this facilitates quick access when using the value of the setting in themes and plugins, it makes it more difficult to access other information about that attachment, such as its title/caption, mime type, or in the case of images, accessing specific image sizes.

WP_Customize_Media_Control was introduced to allow this paradigm to change while maintaining backwards compatibility for the existing WP_Customize_Upload_Control and WP_Customize_Image_Control, which now extend the media control class (see #29215). The media control will save the attachment id for the selected media file to the Customizer setting, rather than the file URLURL A specific web address of a website or web page on the Internet, such as a website’s URL www.wordpress.org. However, note that the default value of the setting must still be a URL, since a default attachment id doesn’t really make sense.

The media control can be used for any type of media, be it an image, audio, video, PDF document, or any other file format that your server supports. To restrict a media control instance to a particular type of content, use the mime_type parameter when adding the control:

The full power of WP_Customize_Media_Control is realized when the control is extended to implement additional custom functionality in a custom child control. WP_Customize_Cropped_Image_Control is a great example of this in coreCore Core is the set of software required to run WordPress. The Core Development Team builds WordPress.. The core Customizer control classes provide several working examples of this; see wp-includes/class-wp-customize-control.php and wp-admin/js/customize-controls.js.

New in WordPress 4.3, WP_Customize_Cropped_Image_Control extracts functionality from the headerHeader The header of your site is typically the first thing people will experience. The masthead or header art located across the top of your page is part of the look and feel of your website. It can influence a visitor’s opinion about your content and you/ your organization’s brand. It may also look different on different screen sizes. image control to allow an image to be cropped to specific dimensions (see #29211). This offers a better user experience than automatic cropping in many cases when images of a certain size or aspect ratio are required in themes and plugins. In core, the new site icon feature relies heavily on the cropped-image control, implementing a child custom control to add additional site-icon-specific functionality.

The cropped image control comes with four custom parameters in addition to those available in the media control. These are used to specify the required (or recommended) image dimensions, as well as specifying whether alternative dimensions are allowed (the flex options). Here’s a typical usage when adding a cropped-image control:

As with the media control, the cropped-image control saves the attachment id instead of the image URL. This can be useful for querying specific sizes of the image, but you’ll typically want the full size image at the cropped dimension. wp_get_attachment_image_src( absint( get_option( 'cropped_image_setting' ) ) ) should do the trick if that’s the case, when outputting the value of the setting.

Remember the Media Grid project? It was original proposed back in the 3.7/3.8 cycle but never really took off — mainly due to our focus on The-Project-Formerly-Known-As-MP6 and the WidgetWidget A WordPress Widget is a small block that performs a specific function. You can add these widgets in sidebars also known as widget-ready areas on your web page. WordPress widgets were originally created to provide a simple and easy-to-use way of giving design and structure control of the WordPress theme to the user. team.

Since then, I’ve been working on a plugin in some spare time: https://wordpress.org/plugins/media-grid/

I’m looking to form a team to work on this project. I think we could have something ready for 4.0, but 4.1 is a possibility as well. It all depends on you. 🙂

I’m looking for any-and-all help, but specifically 1-2 backbone-capable developers with familiarity with the Media Modal would be a huge help.

Maybe we can chat about this a bit during tomorrow’s Dev Chat. Outside of that, lets plan on meeting in #wordpress-ui this Friday, Apr 25 @ 16:00 UTC.

1441 people have pledged time to contribute to Core Team efforts! When looking for help on a project or program, try starting by reaching out to them!