With the introduction of the video widgetWidget A WordPress Widget is a small block that performs a specific function. You can add these widgets in sidebars also known as widget-ready areas on your web page. WordPress widgets were originally created to provide a simple and easy-to-use way of giving design and structure control of the WordPress theme to the user. (#39994) and audio widget (#39995) it was discovered that the WMV and WMA file formats are no longer supported by MediaElement.js as of v3. While coreCore Core is the set of software required to run WordPress. The Core Development Team builds WordPress. is currently shipping with MediaElement.js v2.22, these file formats only play if the Silverlight pluginPlugin A plugin is a piece of software containing a group of functions that can be added to a WordPress website. They can extend functionality or add new features to your WordPress websites. WordPress plugins are written in the PHP programming language and integrate seamlessly with WordPress. These can be free in the WordPress.org Plugin Directory https://wordpress.org/plugins/ or can be cost-based plugin from a third-party is installed, something which is less and less common since the plugin is no longer supported as of Chrome 45 and as of Firefox 52. So with the planned upgrade of MediaElement.js from 2.22 to 4.x (see #39686), it is a good time with the WP 4.8 major releasemajor release A release, identified by the first two numbers (3.6), which is the focus of a full release cycle and feature development. WordPress uses decimaling count for major release versions, so 2.8, 2.9, 3.0, and 3.1 are sequential and comparable in scope. to remove support for the formats. This has been done in [40813] for #40819.

Plugins may continue to add embedding support for these file formats by re-adding them via the wp_video_extensions and wp_audio_extensions filters, for example:

Note that there is no functional difference before and after the removal of WMA and WMV support. When MediaElement.js doesn’t support a format, it displays a download link. Before and after [40813], the following is ho  the audio and video shortcodes look like with WMA and WMV files respectively: 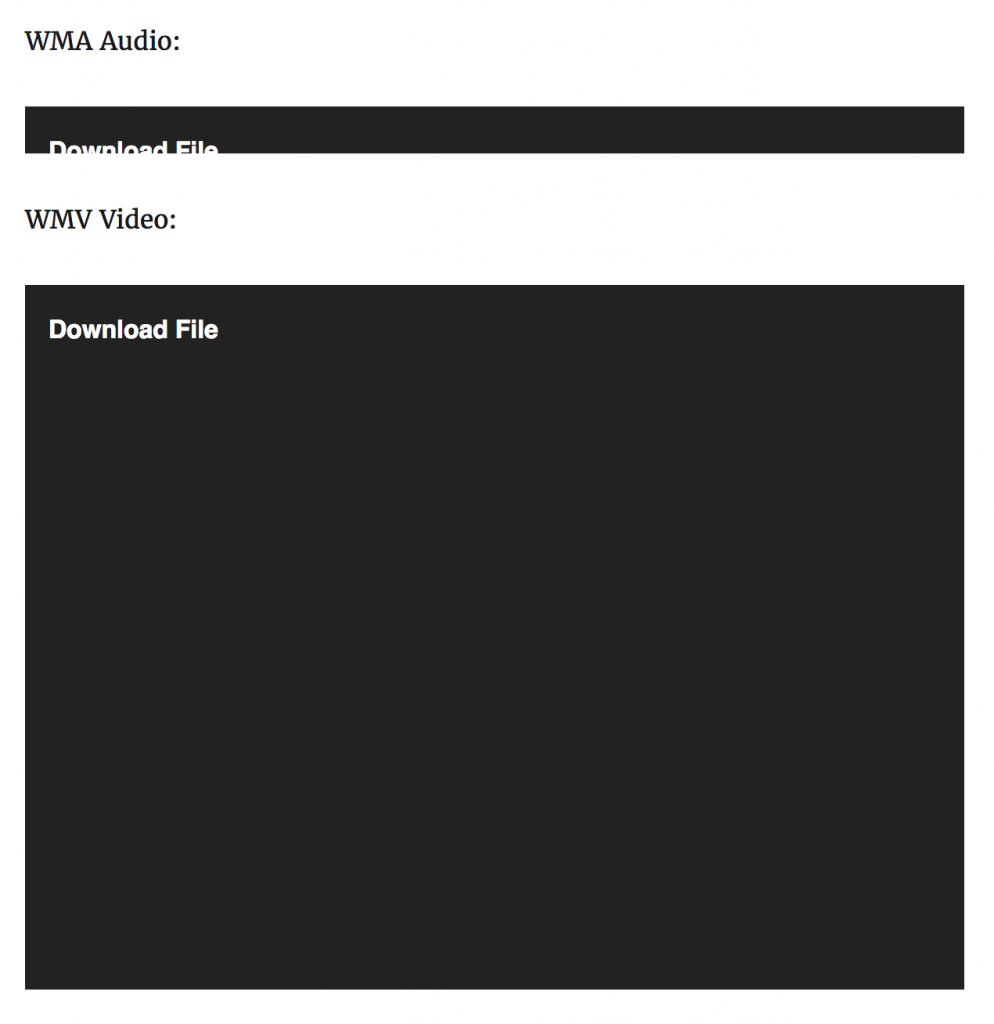 In the adminadmin (and super admin), the functional difference is that these formats are not listed as being available for selection in the Video and Audio widgets. Additionally, when you Add Media in the post editor, there is now no option to embed the player for these formats; only a link to the media will be provided, just as when attempting to add non-media files to content.

1781 people have pledged time to contribute to Core Team efforts! When looking for help on a project or program, try starting by reaching out to them!