A bit over six months ago I set the foundation for the Preferred Languages feature project. After highlighting the problems many WordPress users around the world are facing, some time was spent on researching popular platforms and other systems to see how they handle the issue of setting multiple preferred languages. However, this didn’t really help to move one step forward and the project became dormant — until now.

Personally, I’ve been experiencing the same problems with so-called language fallbacks over and over again. During WordCampWordCamp WordCamps are casual, locally-organized conferences covering everything related to WordPress. They're one of the places where the WordPress community comes together to teach one another what they’ve learned throughout the year and share the joy. Learn more. Bilbao I decided to revive the Preferred Languages project. In order to do this I used the previously mentioned GitHub repository to build a super-simple proof-of-concept pluginPlugin A plugin is a piece of software containing a group of functions that can be added to a WordPress website. They can extend functionality or add new features to your WordPress websites. WordPress plugins are written in the PHP programming language and integrate seamlessly with WordPress. These can be free in the WordPress.org Plugin Directory https://wordpress.org/plugins/ or can be cost-based plugin from a third-party to have a new basis for discussion. As originally envisioned, this repository can be used as a playground for discussions, prototypes, and eventually a working solution.

This new plugin lets you select multiple preferred languages in your settings. WordPress then tries to load the translations for the first language that’s available, falling back to the next language in your list.

A sneak peek of an early version quickly made the rounds on Twitter:

After some very positive feedback I worked a bit more on it and wanted to share the latest version here with a larger group of people. Here’s what it currently looks like on both the settings screen and when editing your profile: 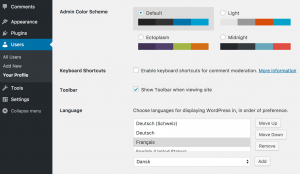 Without much further ado, please check out the plugin on GitHub, test it on your local WordPress site, and leave some feedback!

1378 people have pledged time to contribute to Core Team efforts! When looking for help on a project or program, try starting by reaching out to them!