Warning, this long. tl;dr: I propose a reorganization of our TracTrac An open source project by Edgewall Software that serves as a bug tracker and project management tool for WordPress. components. 34 top-level components with two dozen subcomponents. New tree at the bottom. First, an overview of some of our problems.

These two components have become a dumping ground for tickets. They are ill-defined components with significant overlap — indeed, nearly all areas of coreCore Core is the set of software required to run WordPress. The Core Development Team builds WordPress. have both administration and templating angles.

After our initial run of focuses last week, a number of us have noted how they appear to be an effective tool to solve this problem. We’ve been planning to do a “component tree” — as in, having subcomponents. But it doesn’t make sense to have a dozen or more components simply with the name “Administration” and “Template” and nested under Users, Posts, Comments, Widgets, Menus, Plugins, etc. They aren’t functional, specific areas of core that a component ought to be. “Users” describes wp-adminadmin (and super admin)/users.php, wp-includes/user.php, and wp-includes/author-template.php far better than “Administration” or “Template.” Additionally, if we want to teams to grow around these areas, it makes most sense to group them around functional components.

So, I’d like to propose we make ‘administration’ and ‘template’ focuses instead.

An added benefit of these focuses is it means developers very interested specifically in administration or our templating functions will have an all-encompassing focus from which to work. This enables contributors to specialize as they see fit (and, well, to focus). For more on focuses, see last week’s post.

(A note: This is all reversible. If we later determine this is a bad idea and we need to migrate away from focuses, it would not be difficult to do so.)

There is another component with a bit of overlap: Query. Currently, there are query objects in WordPress for posts, comments, users, and helpers for dates, taxonomies, and metadata. In the future, we may also see one for terms and a WP_Order_Query helper. I do not think this is a focus, though. Rather, these describe very specific, functional areas of core — there are just a lot of them. Date query tickets belong in the top-level “Query” component. Tickets for WP_User_Query should go in a “Query” subcomponent under “Users.” Those interested in the “Query” component would likely be interested in the various “Query” subcomponents, of course. 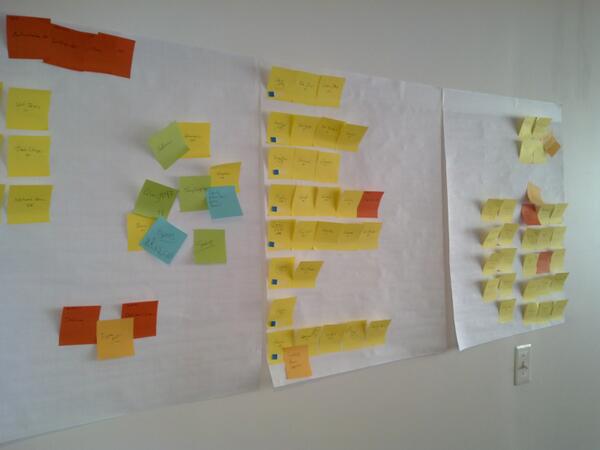 This is my wall right now.

After studying our components for an extensive period, it’s clear to me “focuses” were what we needed to break the logjam. And so I’d finally like to propose taking our 60-something components and shuffle them into a tree.

It contains just 34 top-level items, which are clearly organized around functional areas of core. Ambiguities as to where a ticket goes that trip even me up should largely be resolved. It looks mostly the same, with not a whole lot of changes beyond adding some hierarchy. (I’ve been mocking up component trees for two years now. Earlier plans were much more radical, but focuses make that less of an issue.)

Nine of these 34 items have 24 subcomponents (1-4 each). So why subcomponents? Subcomponents mean we can be both more granular and less ambiguous. You no longer need to pick between two similar components — chances are, one is a parent component of another.

Subcomponents can also be added as needed, especially for new features or tasks, or if a component maintainer sees an optimization that would help them manage their component better. If there’s no longer a demand for a subcomponent, it can simply be removed without hassle, and new tickets can be targeted for the top-level component instead. The current list of components has bloated, and we have been slow in the past to add new ones. That should no longer be an issue.

Having just three dozen top-level components also means it will be a lot easier for teams to form around them. (Anyone can be a component maintainer, helping to triagetriage The act of evaluating and sorting bug reports, in order to decide priority, severity, and other factors. new tickets, look after existing ones, spearhead or mentor tasks, pitch new ideas, curate roadmaps, provide feedback to others, etc.)

A number of existing components are removed in this tree, either dissolved, absorbed by another component, or turned into a focus. For the moment, only two are added — a new “Image Editor” subcomponent for Media, focusing on both the UIUI User interface (‘administration’ focus!) and the APIAPI An API or Application Programming Interface is a software intermediary that allows programs to interact with each other and share data in limited, clearly defined ways.; and an “Admin APIs” subcomponent for Plugins, to catch tickets for the settings API, screen API, and admin menu API. (Also, the “Query” subcomponents discussed above.)

I’ve also been experimenting with a new autocomplete-style component selector. The words you type should be matched not only with components and subcomponents, but keywords for those components (which could include class or file names). Searching for “settings” would find the Admin APIs component with ease, “background” would find the Appearance component, and “date query” would find the Query component. If you’d like to help build this, please let me know. I’d love to have something going this week.

Some name changes occurred, as well — moving away from slashes in component names as these will be used to delineate subcomponents, and adding “API” in a few components. “Cache API” makes it clear it isn’t for caching issues in a comments function. Those belong in “Comments” (performance focus).

Changes (adds, renames) are in bold.

There are a few other changes to consider in the future:

Here are the components removed:

I’ll finally note that this was not just me. I’d like to thank @ocean90, @helen, @sergeybiryukov, @scribu, @markjaquith, @duck_, @koop, and @jeremyfelt (and many others) for weighing in on various proposals going back more than a year. Thanks!

Phew. What do we think? These would be our next steps: