Improved user logout notification ( #23295 ) is now in coreCore Core is the set of software required to run WordPress. The Core Development Team builds WordPress., and its UIUI User interface has been tweaked to directly show the login box, rather than prompting first: 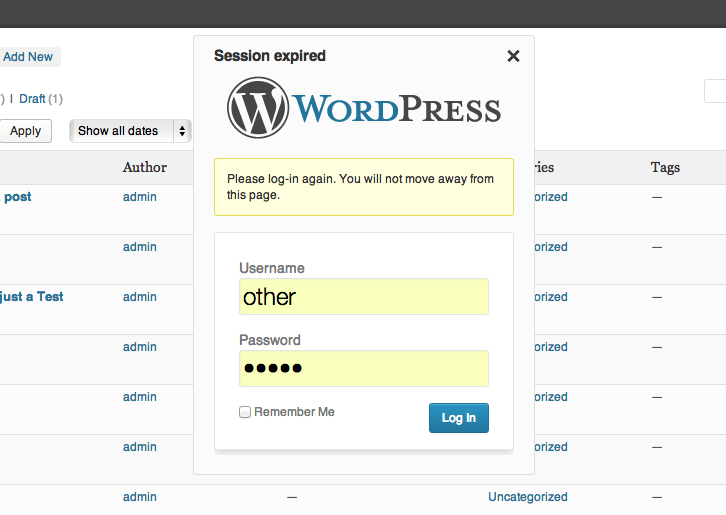 There’s been discussion as to whether it’s better not to blockBlock Block is the abstract term used to describe units of markup that, composed together, form the content or layout of a webpage using the WordPress editor. The idea combines concepts of what in the past may have achieved with shortcodes, custom HTML, and embed discovery into a single consistent API and user experience. the user’s access to the editor/current page when we detect that you no longer have a login token, since it could stop a user while they’re in the middle of a sentence. Any opinions either way? Feel free to comment either here or on #23295.

A simple way to test the above is by removing your login cookie while working in WordPress (Firebug works well).

On local autosaves, there was a decision to pivot from the previous UXUX User experience posted here, and instead integrate with the new revisionsRevisions The WordPress revisions system stores a record of each saved draft or published update. The revision system allows you to see what changes were made in each revision by dragging a slider (or using the Next/Previous buttons). The display indicates what has changed in each revision. model. This code is still being worked on.

In the land of post locks, @azaozz posted a patchpatch A special text file that describes changes to code, by identifying the files and lines which are added, removed, and altered. It may also be referred to as a diff. A patch can be applied to a codebase for testing. on #23697, that shows a dialog either when you visit a locked post, or when your post becomes locked. If you are visiting an already locked post, you have the option to break the lock. This is still in need of UX/UI love, but looks like this currently:

Finally, a patch on #23665 allows for one autosave per user per post, rather than per post, to let us keep an autosave from before you lost a lock. Testing on this, and the rest of the above welcome!

1375 people have pledged time to contribute to Core Team efforts! When looking for help on a project or program, try starting by reaching out to them!