This is a rather late update, and will serve for the last two; apologies!

Last week, we talked about the locks that went in, and @markjaquith suggested that we replace the “lock” with a GravatarGravatar Is an acronym for Globally Recognized Avatar. It is the avatar system managed by WordPress.com, and used within the WordPress software. https://gravatar.com/., which I like quite a bit. Will experiment with that to see if it can work.

Today we chatted about the most recent update to #23220 posted by @azaozz, which integrates the work done by @asannad (AmitSannad on IRCIRC Internet Relay Chat, a network where users can have conversations online. IRC channels are used widely by open source projects, and by WordPress. The primary WordPress channels are #wordpress and #wordpress-dev, on irc.freenode.net.), and adds a UIUI User interface for selecting which you’d like to restore: 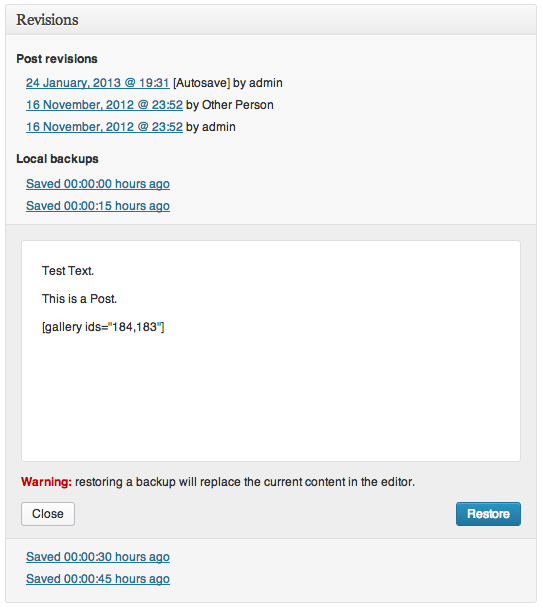 In addition, if it’s found that you have an autosave that has failed, and have a newer version locally, you’re warned (either on the Posts list or Post itself), and linked to the UI that allows you to restore the content (post content and title only) and save at will:

It was brought up during the chat by @nacin that the UI included in the patchpatch A special text file that describes changes to code, by identifying the files and lines which are added, removed, and altered. It may also be referred to as a diff. A patch can be applied to a codebase for testing. might be more than we need, and that we should decide what is best for the user regarding restores, and perform it for them. We continue to chat about this, and opinions are welcome!

Lastly, there is a patch from @mintindeed on #23295 currently waiting for integration! That patch, and the one on #23220 could use some testing — let us know if you run into problems on tracTrac An open source project by Edgewall Software that serves as a bug tracker and project management tool for WordPress..

1711 people have pledged time to contribute to Core Team efforts! When looking for help on a project or program, try starting by reaching out to them!