Welcome to the official blog of the community/outreach team for the WordPress open sourceOpen Source Open Source denotes software for which the original source code is made freely available and may be redistributed and modified. Open Source **must be** delivered via a licensing model, see GPL. project!

We use this blog for policy debates, project announcements, and status reports. Everyone is welcome and encouraged to comment on posts and join the discussion.

You can learn about our current activities on the Team Projects page. These projects are suitable for everyone from newcomers to WordPress community elders.

You can use our contact form to volunteer for one of our projects.

We have Office HoursOffice Hours Defined times when the Global Community Team are in the #community-events Slack channel. If there is anything you would like to discuss – you do not need to inform them in advance.You are very welcome to drop into any of the Community Team Slack channels at any time. four times a week in the #community-events channel on Slack: Mondays & Wednesdays 22:00 UTC, Tuesdays and Thursdays 9:00 UTC.

We also have regular Community Team meetings on the first Thursday of every month at 12:00 UTC and 21:00 UTC in #community-team on Slack (same agenda).

Events WidgetWidget A WordPress Widget is a small block that performs a specific function. You can add these widgets in sidebars also known as widget-ready areas on your web page. WordPress widgets were originally created to provide a simple and easy-to-use way of giving design and structure control of the WordPress theme to the user.

If you have questions about the Events and News dashboard widget that came out in WordPress 4.8, please read this FAQ!

The location data on the Past WordCamps page is inconsistent. Take this screenshot of a few of them: 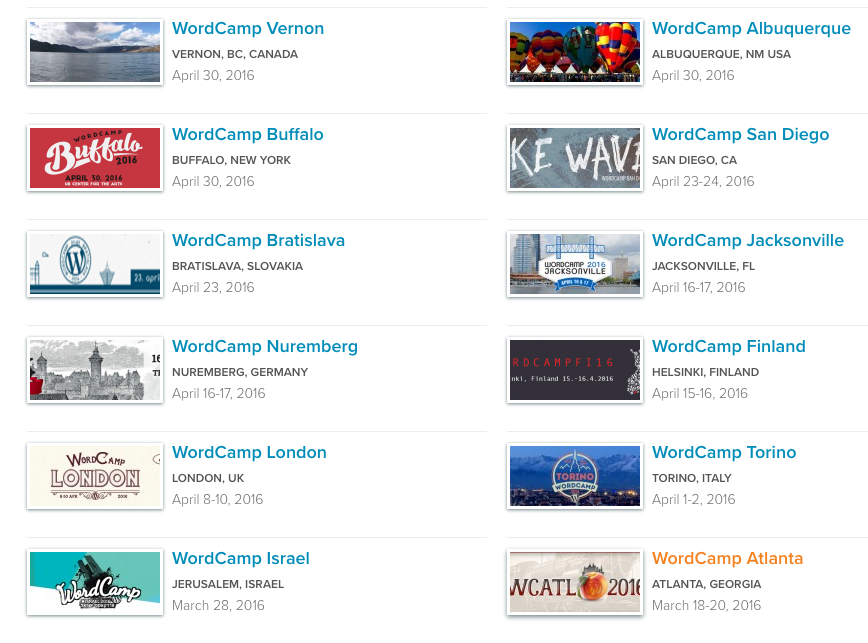 Here we can see examples that are indicative of the rest of the page, that:

My understanding is that these locations are set at the time of the application. I’d argue though that there is value in normalising the location at some point during the acceptance process (orientation?).

There’s no reason for events in the US not to have a country; that shouldn’t be an implied default. Including the country means it’s easier to search on the page for events in the “USA”, in the same way that I can search for “UK” events. In the case of “Atlanta, Georgia”, there may be confusion since there is a country called “Georgia”.

In the case of abbreviations, I’d suggest that US (and non-US) states are not abbreviated. Abbreviations like this tend to only be useful to those who know what they mean. Removing these abbreviations would:

In terms of country abbreviations, I think “USA” would be acceptable, but otherwise country names should be written in their typical non-abbreviated (not official) name, including “United Kingdom”.

States / regions for other countries can be optional, if the submitter feels that the location needs clarification (though it’s rare, even the UK has a couple of places that are clarified with the county too).

“The location must include the city and country. Events in the USA must include the state. States / regions in other countries are optional, if it adds necessary clarification. Abbreviations for USA
are accepted. Don’t abbreviate US states. Include commas between each part.”

Whatever rules you discuss and ultimately choose, should be retroactively applied to these past WordCampWordCamp WordCamps are casual, locally-organized conferences covering everything related to WordPress. They're one of the places where the WordPress community comes together to teach one another what they’ve learned throughout the year and share the joy. Learn more. entries to update them as necessary. The aim is to have consistent, accessible and non-ambiguous data.

(Obviously, the changes here would apply to upcoming WordCamps too, but the issues were easier to see in the Past WordCamps page.)

Here’s what the previous screenshot would then look like: 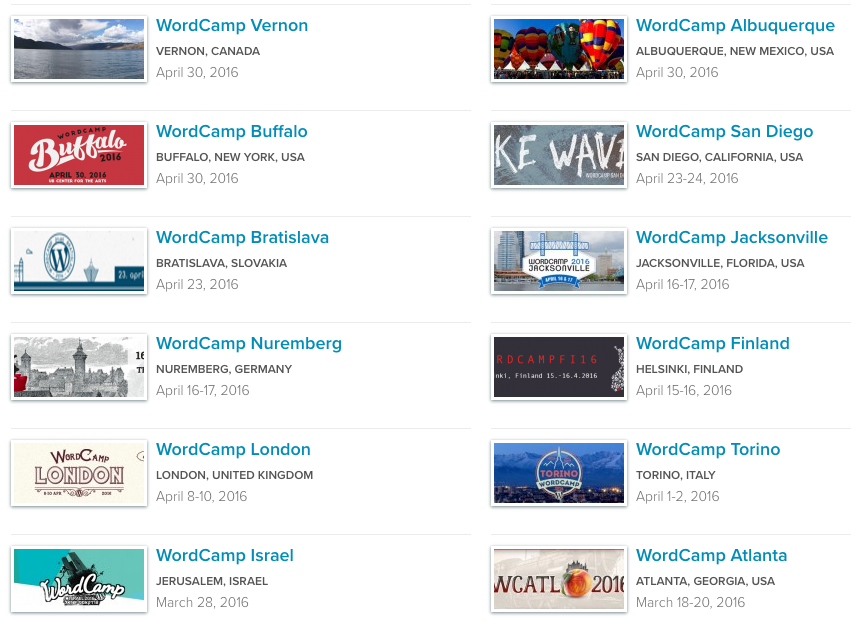 Office Hours
Community Team deputies hold office hours to answer your questions. They take place in #community-events on Slack on Mondays & Wednesdays at 22:00 UTC, and on Tuesdays & Thursdays at 9:00 UTC

The Diverse Speaker Training Working Group meets on the 2nd and 4th Wednesdays of every month at 17:00 UTC.

Community Deputies are a team of people all over the world who review WordCamp and Meetup applications, interview lead organizers, and generally keep things moving at WordCamp Central. Here are some useful links about the program:

1526 people have pledged time to contribute to Community Team efforts! When looking for help on a project or program, try starting by reaching out to them!